I've had my first reader feedback on the Stormfall Chronicles prequel, mostly centering around the pacing and a couple of the side-characters in the story. My middle daughter's feedback has been invaluable in refining the storyline.

A few of the chapters have undergone some rearranging as a result - particularly closer to the end of the story where a lot of things are happening at once. It has not been the edit cycle I might have originally envisioned for the 4th draft of this novel, but it was the edit cycle which was needed.

It's coming along nicely, although another round of edits and beta-readers is still needed to polish the story before release.

Each successive edit cycle tends to take less time, with fewer additions and changes to the text. Having now completed the 3rd draft of the Stormfall Chronicles prequel, the text has grown from 52,000 to 55,000 words. The number of "chapters" or "episodes" has likewise grown from 39 to 40. 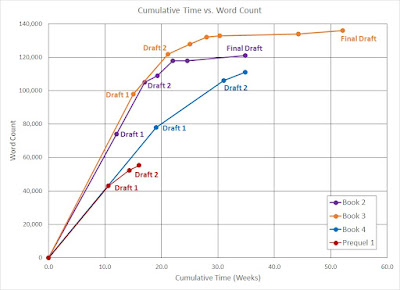 Ordinarily, I would continue to complete multiple edit cycles at this point, and begin to seek beta-reader feedback on the draft novel as part of this process.

In this instance, however, since the story is expected to be released as a serial, on Kindle Vella, I'm planning to begin honing the story on a chapter-by-chapter basis. In other words, Chapters 1 through 4 might each undergo multiple edit cycles and beta-reads, before I even begin additional edits to Chapter 5.

Getting more excited to see how this story shapes up.

I've completed the 2nd draft of the Stormfall Chronicles prequel I've been working on, with the text growing from 43,000 to 52,000 words.  Along the way, I ended up sub-dividing one of the longer chapters, so the "episode" or "chapter" count has grown to 39. I'd like to see at least one more edit cycle completed before I'm ready to submit the draft to my beta-readers.

I have finally finished the initial draft to the first prequel for the Stormfall Chronicles. As I had indicated in a previous post, it's my intention to publish this prequel as an episodic series on Kindle's Vella platform.

Before I can do that, of course, there is a lot of editing which needs to be done. At least I have a skeleton to work with now.

The first draft spans 43,000 words, arranged into 38 short episodes or chapters. My plan is to complete the second and possibly third draft, front-to-back for the series - getting the story's flow right - before beginning to edit and release the final draft for each episode on a chapter-by-chapter basis.

I can't deny that I'm excited to see this story take shape. 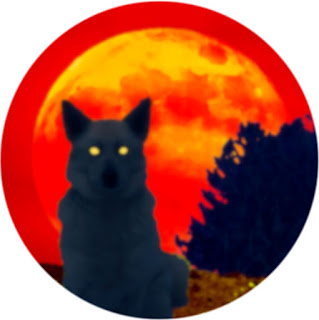 This past month has come with a lot of changes. My two oldest daughters, who were also my beta-readers for the prior novels, moved to their respective university campuses. It's been quite an adjustment to not have them around. Tomorrow, my youngest starts her sophomore year in high school.

While we were preparing for the move, and my daughters were beginning their beta-read of Book 4 in the Stormfall Chronicles, I took a little time out to begin a new project. As those who follow the indie author scene might be aware, Amazon has launched a new Kindle service known as Vella. The new platform is aimed at delivering episodic series a chapter at a time rather than as a completed novel. It's a different, and intriguing prospect, which I thought might be a good match for one of the prequel novels I had been contemplating as a spin-off for the Stormfall Chronicles.

Ever since I first introduced the character in Book 3, I was convinced that Callisto was deserving of her own prequel (and likely a sequel) story. Being focused on a single character, it would be very different from the Epic landscape of the first four novels. It also might be well suited to a episodic format such as Vella offers.

I am currently over half way through the first draft of this prequel story, patching it together between preparations and moving my daughters across country. It will be shorter than the novels have been, and would likely be released one week at a time, chapter by chapter - once the initial draft is complete. It has definitely been a different canvas to work from. Hopefully it brings a little insight into the tragic beginnings which made Callisto into the figure she becomes.

I've completed editing the third draft to Book 4 of the Stormfall Chronicles. The total word count has grown from 106,000 under the second draft, to 111,000 words today.

For reference, I have attached a tracking chart, for visualizing my writing progress in comparison to the prior novels. Although the first two drafts for Book 4 took longer to write and edit than I would have anticipated, the third draft is in line with the turn-around time expected from the previous novels. 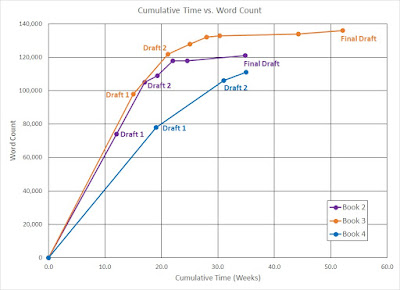 Ordinarily, I wouldn't be releasing copies to my beta readers until after the fourth or fifth draft. In this instance, however, two of my beta readers (my oldest two daughters) will be leaving for their respective universities in August. I will therefore need to release beta reader copies a little earlier than I might otherwise have wanted. My beta readers have been a key part of my editing process, however, making this unavoidable. 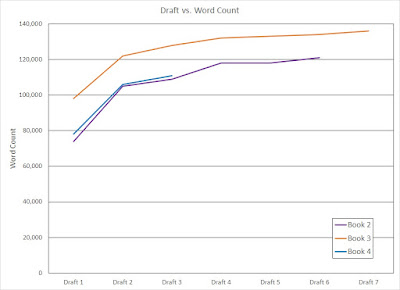 I've finally completed editing the second draft to Book 4 of the Stormfall Chronicles. Between the first and second draft, the total word count has grown from 78,000 to 106,000 words.

This is similar to the word count for Book 2 at this same point in the editing process, which went from 74,000 to 105,000 words between the first and second draft. Book 2 totaled some 121,000 words by the time the final draft was released. I'm hoping Book 4 is a little closer to its final form at this point, than was the case for Book 2.

The editing process has taken a lot longer than I had hoped it would, but at least this draft is done. My first draft usually forms a skeleton for the story, and I rely on the second draft to fill-in missing chapters and scenes.

My three daughters, from a photo taken just five years ago. Life is a series of chapters, each with their own beginnings and endings. So... 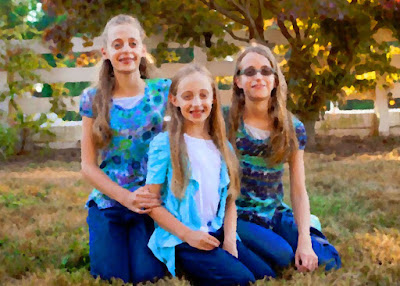 J.W. Golan
A writer, father, and aeronautical engineer, J.W. Golan lives in New England together with his wife and three daughters. It was his daughters who reintroduced him to the world of fantasy fiction. Literature was something that all of them could share, discuss and compare - together with other fantasy and literary influences. He was able to introduce some of his favorites to his daughters, and they in turn, introduced him to some of theirs. It was this latter experience, sharing and discussing stories and literature, that convinced him to try his hand at composing fantasy novels once again: weaving together tales and ideas that had been circulating in his mind for decades.